I consider myself pretty nostalgic. I think I’ve passed that down to my boys, too, because they like to ask about my childhood. You know, because it was so long ago. We like to watch “old” movies together, read the same books, and make the same recipes.

(If they can be a part of the military rations since WWII they can probably last in my purse in the AZ summer.) They are also one of the few treats I used to eat as a child that still taste the same. Am I the only one that thinks that? Why mess with a good thing?

Anyway, I love that they are a quick, easy treat to keep on hand for whenever the need arises. It has been a while since we’ve had one so we got some out the other day while doing some yard work and watching the dogs outside. Then we had an interesting conversation:

Me “Boys how many licks do you think it takes to get to the center of a Tootsie Pop?”

Boy1 “Mom how much did Tootsie Pops cost when you were a kid?”

Me “I don’t remember. I was a kid and my mom or grandma usually gave them to me.”

Boy1 “I think they were a penny because I read that there used to be penny candy.”

Me “It cost more than a penny. I wasn’t a kid that long ago.”

Boy1 “It was probably a penny.”

Me “Fine it was a FEW pennies – so how many licks do you think?”

Boy1 “Apparently 3 because that’s what the owl says on that commercial.” (That commercial first ran in 1970, and the same exact one still runs today!) 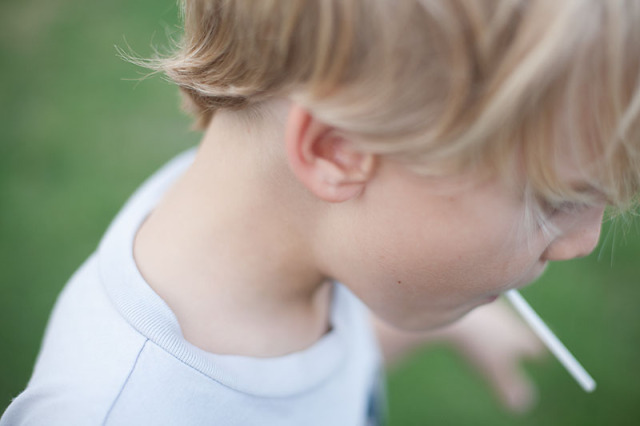 And then we went on to discuss more of my childhood and how safety precautions were a bit different back then and more about how much things cost way back then in the 1980s when we only had 5 channels on TV, and we had to get up to change them.

Tootsie Pop is running a video contest in October about that very question “How many licks does it take to get to the center of a Tootsie Pop?” You can enter through the Tootsie Roll or Tootsie Pop Facebook page – click “Like” and go to the “How Many Licks” Contest page. Submit your entry (a video with your answer to the question) for a chance to win weekly prizes as well as the grand prize!

There will also be a viewers’ choice winner. I know I have some clever kids (readers’) and would love to hear their answers!

I’d love to know, have you had this fun discussion yet with your kids?!

*Tootsie Roll Pops are produced in a facility that does not use peanuts, tree nuts, eggs or gluten. (yay!)