Yes! I got to interview Jason Bateman! I’m not a huge “OMG a celebrity!” person but I love getting to meet people whose talents inspire and entertain me and my family. We all love Jason for different reasons and I have quite a few friends who were more than excited for me to get to meet him in person and ask a few questions about him and his role as Nick Wilde in Zootopia during the incredible #ZootopiaEvent that I attended last week.

Do you see my head right next to Jason’s? It’s the little blonde head peeking out lol! First of all, let me say he was so gracious and relaxed to be meeting with a room of 25 bloggers and he’s even more handsome in person than he is on screen.

Jason came out, sat down on the side of the interview table directly in front of me and got comfortable for the 15 minutes he’d be in the room with us. He was so great joking a bit and answering questions and then stayed at the end to take a photo with us. He even asked me what EPCOT was like (apparently he’s never been)!

I think we were most interested in what Jason thought about working in animation on a feature film with a major character. He’s such a natural comedian and would that relate through the animation?

“It’s a really interesting process because, as an actor, you say your line and then you’ve got your face and your body language and everything to kind of contribute to the whole thing. With this, obviously you just have your voice to use and then you hope that the animators are going to make the character do something that either supports what you’ve done, or offset it, or juxtapose it. It’s kind of a cocktail to make somebody laugh. You don’t realize how many little components there are. I don’t mean to sound like some kind of a comedy scientist but we all do it, you know. When you tell a joke or a story there’s inflection and then there’s facial gestures and it’s a pretty strange thing to just hope that the rest of the recipe gets cooked in the right way.”

Good thing he didn’t need to worry about that! They MUST have studied his facial expressions because Nick Wilde looks SO much like Jason to me!

Of course we asked Jason what he thought about working on a film that his little girls could see.

“Yeah, it’s very, very cool to be leaving home to do a job that I can prove that I was actually doing. I have two little girls, nine and four, knowing that they are going to see it, it gives (me) pride. First of all, it’s the only (kind of) movies that I see now, you know, a kid movie comes out and you have to take them and you just hope that it’s good. And if it’s not good, you are still buying a ticket to it. You still have to sit there. You just might catch a little nap, you know? But with Zootopia there won’t be any napping because there’s some stuff in there for us, whether it be thematic or just with the jokes, there’s always kind of that parallel lane of satisfaction for the adults.

And in (Zootopia) there are some really great issues and themes, that I don’t know if my nine year old really picks up on some of the nuance and sophistication of, these heady, highbrow issues in here yet, but I’ll bet you some of it kind of permeates, and when the coin finally does drop maybe when she’s another year older or something when we’re watching it for the 20th time at home, it’s a nice tool for me, as a dad, to talk about (themes) in this film like racism or xenophobia or fear mongering or bullying. It’s a nice tool for me as a parent. I like that.”

Jason explained to us a bit about how the animation came after most of his voice recordings (which makes total sense now that I think about it). I though this was SO interesting and he explained about how the voice actors are videotaped so that their facial expressions can be referred to if needed.

“They videotape you when you are recording your lines. There are a couple of cameras in there. So, the animators if they want to use that as a guideline they can.” (I’m guessing they really did after watching Nick in the film!)

I think my favorite part of the interview was when someone asked Jason if any of his personality went into his character.

“Yeah, I’m not a big fan of doing a lot of acting, you know?  I mean, I think that the goal is to not act, right, to look natural, so I try to use as much of me as possible in any part that I play, plus, I’m also pretty lazy so any character I play is always inside my skill set, sort of my goal post.

If I read a script and there’s a character that is so far from me that I would have to do a lot of acting to play that character, then just by definition I probably shouldn’t play that character because then you are going to see acting, you know? So yes, there is quite a conniving, sarcastic, fatigued part of me. My mother is British so she kind of taught me that kind of sense of humor, that dry, reactive sort of sense of humor. So hopefully I know how to use it in a good way.”

He definitely uses it in his role as Nick Wilde and I LOVE him in this role!

Thank you SO much Jason for taking the time to meet with us. You made me even more excited to share this film with my boys and now that they’ve seen it, they can’t WAIT to see it again to take in even more details.

Zootopia is in theaters Friday March 4th in 3D! 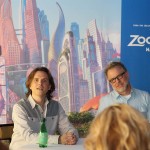