Meeting Karl Urban was one of the big highlights of the #ThorRagnarokEvent for me. He is one of those men that seemed truly happy to be there talking with us about all things Marvel, his character Skurge and even a little bit about Cate Blanchett. When he walked into the room he walked up each row and shook every bloggers hand. I think we all ended up loving his character (you’ll have to see the movie to see why) and really became huge fans after this interview! 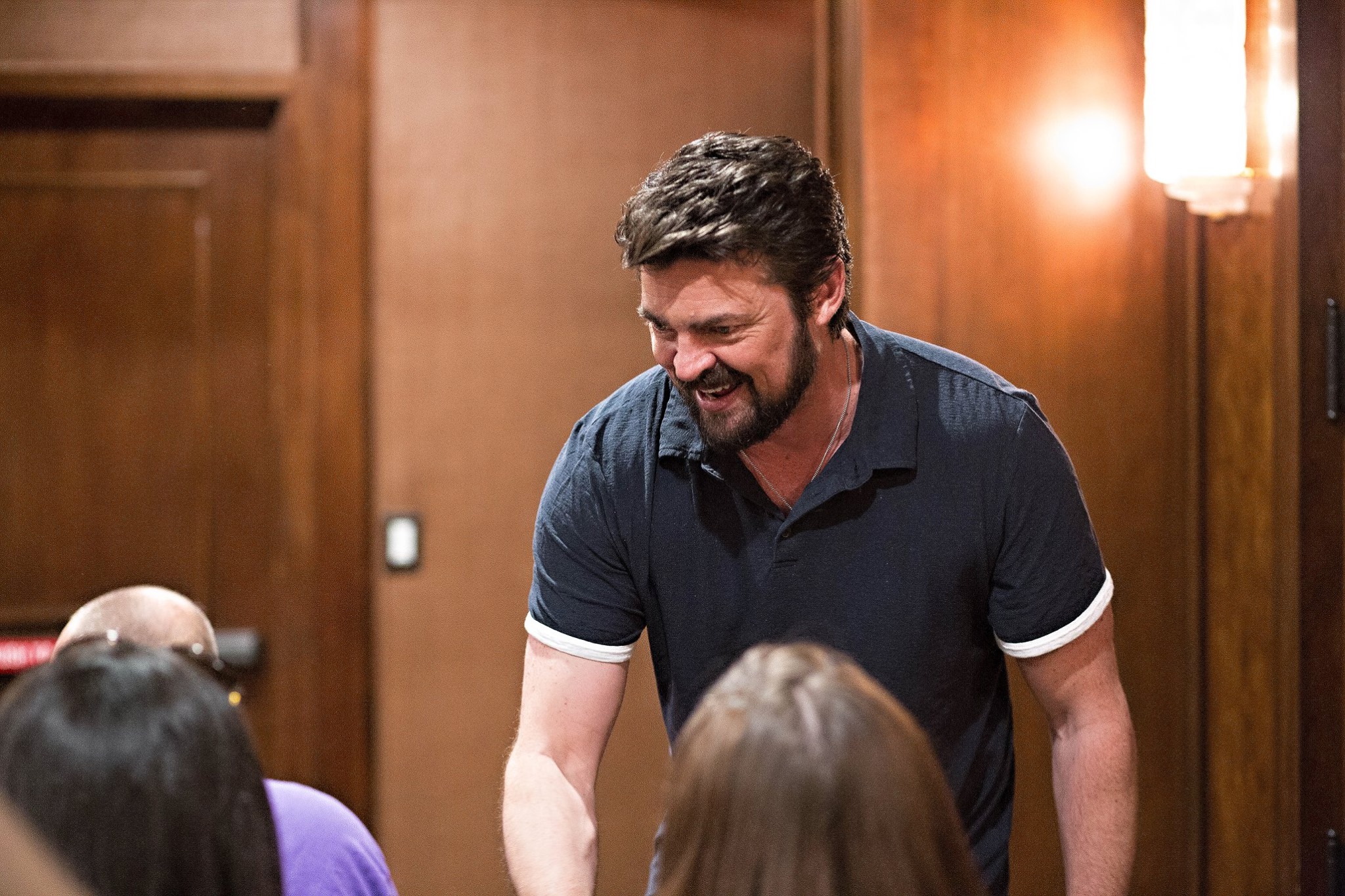 I heard that a lot of the movie is improvised, can you go into that?

Allegedly. Yeah, it- you know what, I guess full credit to Marvel. They hired a a director in Taika who has a very strong comedic style and sensibility and they actually let him do his job. You know, there was already a brilliant foundation in the script and we would shoot a couple of versions of what was on the page and then shoot a wealth of material that that Taika quite frankly just made up and there was nothing sacrilegious about a take, you’d be in the middle of a take and he’d be, ‘oh why don’t you say this, say this line’ or a piece of direction just yell it out. And it was actually kind of liberating. You felt comfortable in that there was no such thing as a bad choice that there was nothing precious about it. I think that really kind of afforded everybody a wonderful freedom to, you know, fully explore all the options. I can’t wait to see the extras on this movie. I mean it’s like the movie is funny and entertaining but I think the extras are going to be as equally entertaining and I can’t wait to see them.

Was last night the first time you saw the movie?

Yes it was yes.

What did you think?

I feel so blessed. It was such a pleasurable experience to not only see the film with with my friends and colleagues, but to to see the film with an audience who were thoroughly entertained. You know, again, you have to give full credit to Taika and to Marvel for really producing a film that I think reboots Thor in a wonderful healthy positive way. And I’m so happy for Chris that he’s actually finally been given the opportunity to spread his wings. I think that this film showcases his complete full potential. You know, everyone is allowed to bring it.

I heard you didn’t realize what the role was at first. What did you think when you found out what your character would be like?

Yeah well, you know, it’s always a mistake to play a stereotypical caricature of the villain – you know, just to twirl the moustache, wear a black hat, that’s pretty boring. What makes a character interesting, in my opinion, is the faults and the flaws that you can understand. And in this case, it’s pretty clear that this character is just trying to survive. And you could see what it meant to him –his fear, his regret, his internal repulsion at what he was seeing was palpable. But he had no choice, so, again it it just felt like it was eminently relatable.

What kind of things did you do to help get into character?

You know, I can say this is one of the most fun sets that I’ve ever been on. Taika is constantly playing music in between takes. I’m so proud of him. He really handled himself with quite aplomb and I imagine it would have been a pressure cooker situation to be responsible for this behemoth movie. But he did it with such aplomb and such grace and style. And he created an an environment that was not only fun, but it was focused. And that’s a rarity. 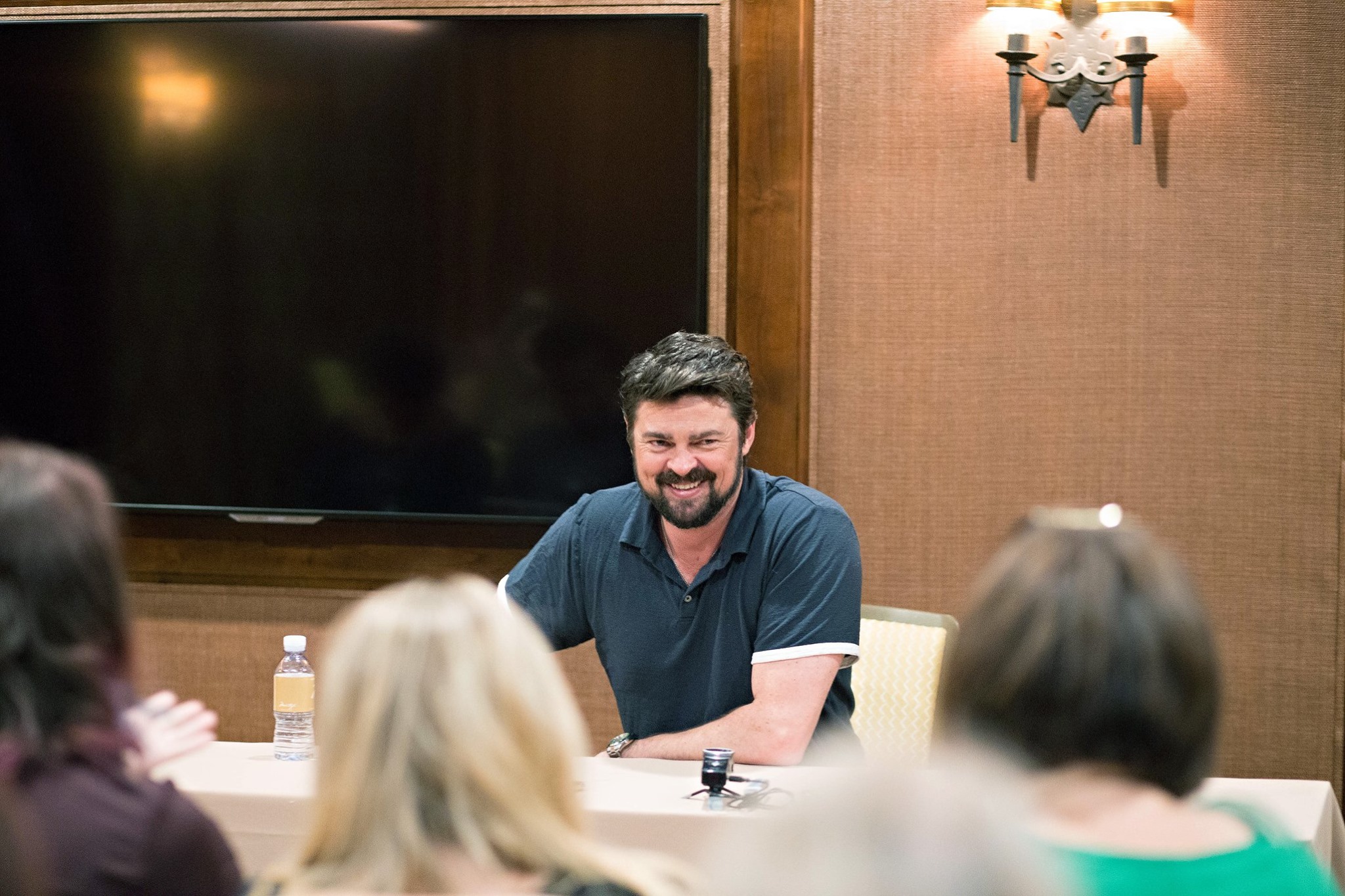 The women in this film are awesome and were fighting against everything, what does that mean for you? Since this is a movie that younger people are watching, is that important for you? Cate and Tessa?

It’s imperative. I think it would have been a boring movie without them. Cate and Tessa are so wonderful in this film. They are my favorite parts of the movie. I love seeing Tessa’s swagger. I love the journey of her character from the dark place that she was in to redemption, to reclaiming herself with her identity. I thought it was a a strong, compelling journey. Then I had such such a wonderful time working with Cate Blanchett. I mean, to be perfectly honest, she was the reason I decided to do this movie – it was the opportunity to work with Cate Blanchett. I read that script and saw that ninety percent of my material was with her. I was like ‘where do I sign up? How much do I pay you?’

What’s it like being part of Marvel Universe and what’s next for you – will we see you in any of the Dredd films?

Being part of Marvel Universe is an absolute pleasure. They are a wonderful collaborative company. And I just have a huge degree of admiration or respect for what they have done. And, particularly what they have done on this film – how they’ve supported Taika and really put a network around him and gave him the freedom and
had the courage to let him do his job. You know,nobody does it better than than these guys. Many people try and copy them, but they have got a formula and they they are heavily aligned with the creative element of the process. I think that’s to their benefit.

A Dredd TV show? Okay well, Rebellion who own the rights to Dredd are in the process of developing a a TV show that won’t be a sequel to the movie, but it’ll be I guess a reboot or a reimagining. And I’ve said to them ‘yes I’m interested in reprising that role if they write a character that has a purpose and a function and there’s a sort of, you know, an emotionally compelling story, then I would love the opportunity to go back and continue to explore that character.’ And so we’ll see what they do. I guess the movie that I’m most excited about apart from Thor is a film that I shot this year with Sofía Vergara, who’s so brilliant. It’s this movie called Bent that was written and directed by Bobby Moresco, who wrote Crash and Million Dollar Baby. So it’s got a great pedigree. It’s a sort of a modern take on a classic noir genre and I just had the best time working with Sofía. You know, you all know her for her comedy, which she does extraordinarily well. In this film she engineers a real paradigm shift and she plays this femme fatale and she’s going to blow people away. 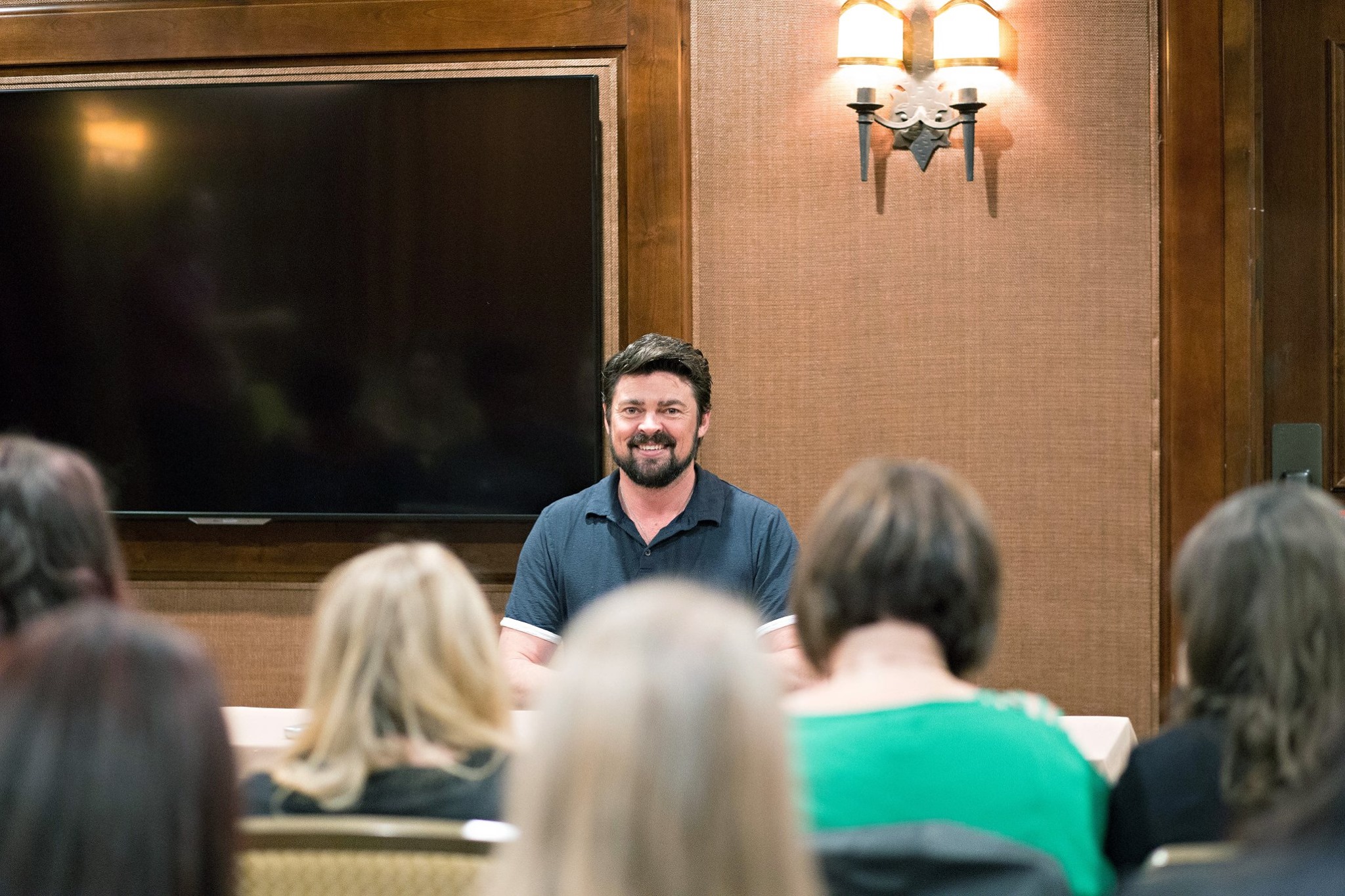 How is your process different working on TV as opposed to a Marvel film?

Well the the last television project I did was a few years ago now and I found that to be quite grueling – you know, quite often working seventeen hours days six days a week. I loved working with the cast and crew on that, but it wasn’t my most pleasurable experience. That being said, actually working on on this film was a sheer pleasure, and we actually worked hard. We worked some six day weeks, but we worked ten hour days, we didn’t stop for lunch. So there was a constant momentum. And so between, you know, that sort of demand,and we had a limited amount of time to get it and you know with Taika providing the sound track, it made it enjoyable.

Your boys how old are they now? 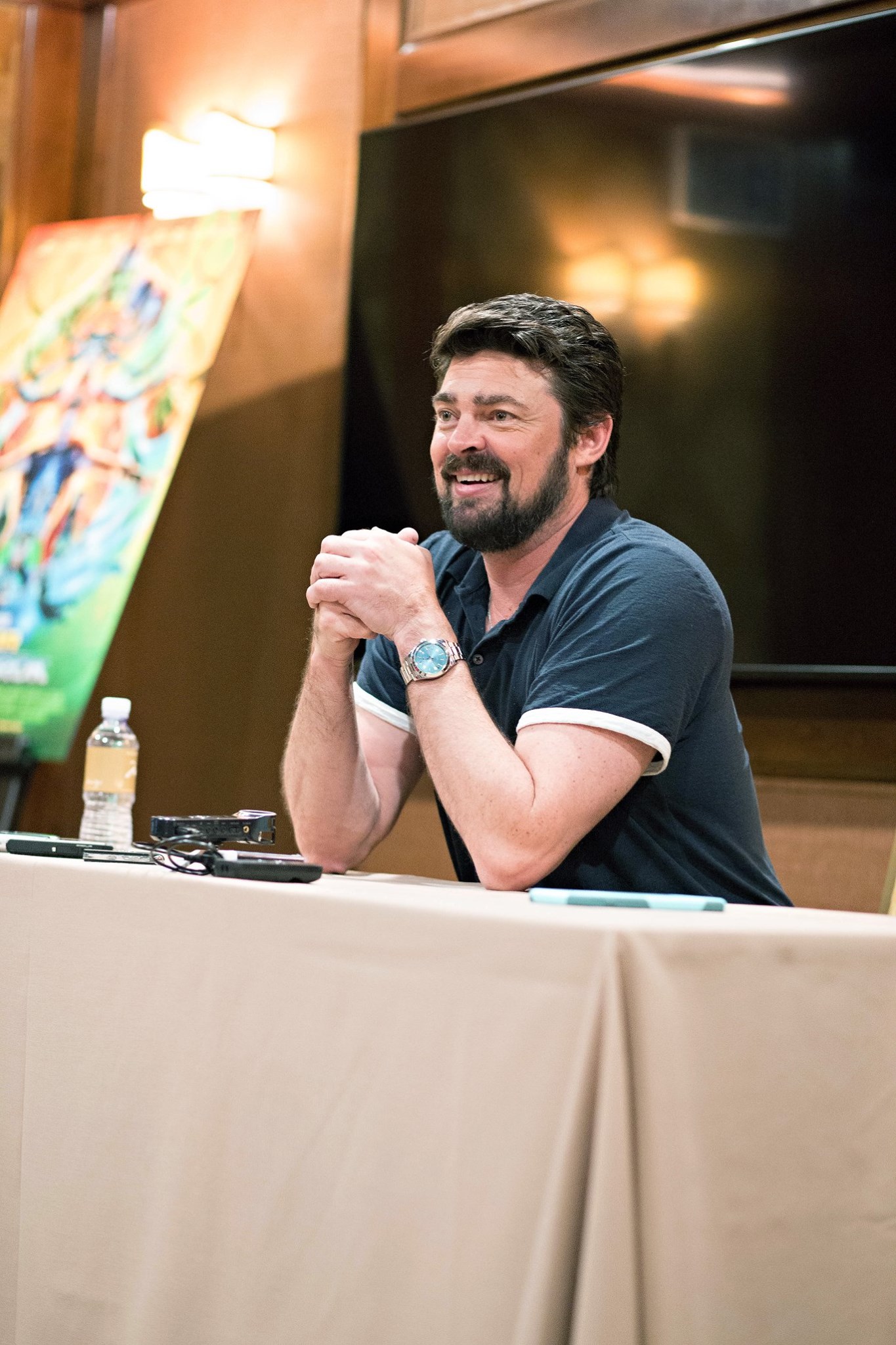 You’re trying to survive and do the right thing, how do you teach that to your boys?

Well I I think with parenting the key is to lead by example and provide a lot of love and support for them. I’m also a firm believer in allowing them to fall down and allowing them to make mistakes, because that is ultimately the way we learn. You know, if you can learn from somebody else’s mistake then you’re smart. But most of us learn by making mistakes. It’s wonderful to watch watch them grow and flourish when you don’t push them too hard. And I think that’s when I’m most proud of my sons is when out of their own volition; they start to make the right choices in life like, ‘you know what, I’m going to go and get a part time job. I’m going to start eating healthier.’

Some theaters have showings of THOR:RAGNAROK tonight and it officially opens in theaters everywhere tomorrow November 3rd! I’ve heard that it’s the best reviewed Marvel film yet! 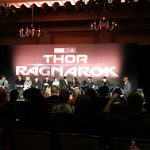 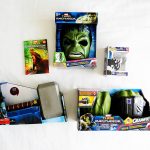